Dave Urbanski
May 11, 2020
Image source: KFSN-TV screeshot
Like Blaze News? Get the news that matters most delivered directly to your inbox.

They apparently love their waffles in Fresno, California, and nobody — not even a police officer and code enforcement officials — was going to interfere with their Mother's Day indulgences at aptly named local eatery, Waffle Shop.

The restaurant has been a focal point of lockdown pushback in Fresno as it opened last week in defiance of the city's "shelter in place" order and soon received a warning and fine, KFSN-TV reported.

On Sunday morning, police were dispatched to the Waffle Shop to assist city code enforcement officials in issuing a citation to the restaurant's owner, the station said — and video captures what happened next.

The officer walked up to the restaurant where he was greeted by people in front of the door who wouldn't let him enter.

"We're not gonna let you in," one person tells the officer. "We've been waiting for hours," another person says.


After the officer apparently threatens to arrest a woman standing to the side of the door, she shouts back, "You're gonna arrest me for what?"

"I ain't interfering with s**t," she shoots back. "I can say anything I want to."

With that the officer appears to shove a white-bearded man out of the way, and immediately people start shouting at the cop.

The video then shows the officer confronting a taller white-haired man in a blue shirt, and after a scuffle, the police officer grabs the man and begins handcuffing him.

The officer then leads the man and a woman away from the restaurant.

One observer — clearly displeased with the cop — angles up his right arm in a Nazi salute and goose-steps behind them.

Who is the handcuffed man?

The man led away in handcuffs is 73-year-old Tom Miller Sr., KFSN reported, adding that the woman with him is his wife.

Police told the Fresno Bee the detained man was released after about 15 minutes.

Tom Miller showed a wrist wound to his son from the handcuffs: 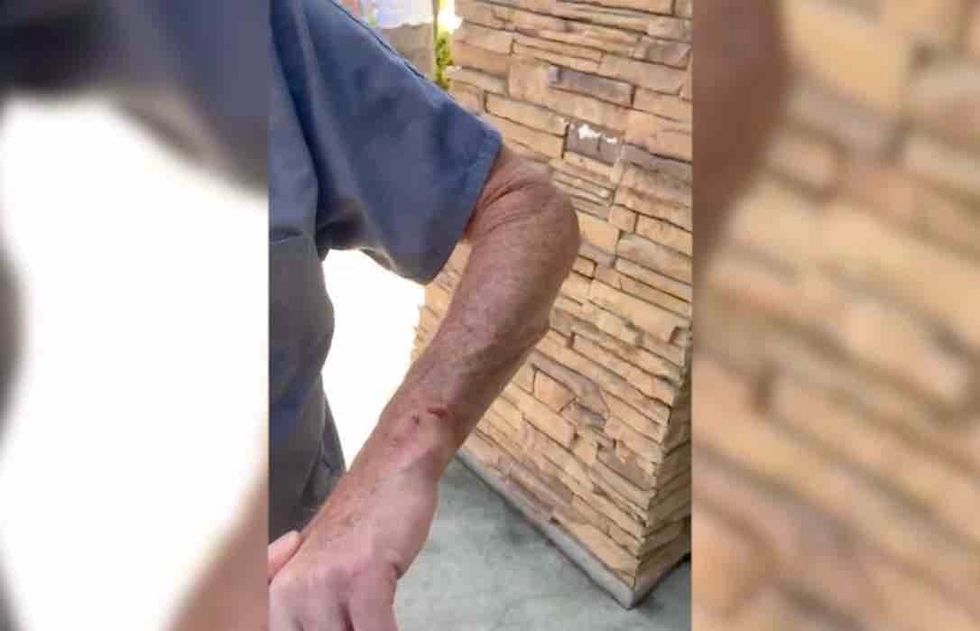 "He told me to get in the car, and he would loosen 'em," the elder Miller said on video regarding the officer. "I get in the car, he slams the door. He didn't even think about loosening them."

Nate Miller also shot video of him confronting the officer who detained his dad.

"This police officer put a 73-year-old Vietnam veteran into the back of a police car for eating at the Waffle House," Nate Miller is heard saying on the clip. "The officer is claiming battery."

What did police have to say?

Sgt. Walter Boston told the Bee on video that "a bunch of citizens blocked the doorway and in essence barricaded code enforcement from being able to enter the business, so they called police." The people blocking the doorway stayed for the officer and "weren't going to allow law enforcement in," Boston added on the clip.

The sergeant also told the paper that "one person grabbed an officer and pushed him away" — and added to KFSN that the officer's body camera would prove that.

"We are not the COVID police," Boston added in the Bee video, also saying that "I understand the politics. I understand how heated it can be, but I can't have citizens ... grabbing officers and pushing them and assaulting them." He also said the matter would be turned over to the district attorney.

The sergeant also seemed to struggle on the clip to specify what the restaurant was doing wrong, saying the business was "still in violation of whatever ordinance or sections they're using here to — um, you know — there's no social distancing, you're not allowed to be open, or whatever it is, code enforcement is there to do their job and to issue a citation to the owner of the business."

Fresno Police Chief Andy Hall said in a statement Sunday afternoon: "I am concerned over the manner in which this incident was handled as it doesn't appear to be consistent with our Department's policy concerning demonstrations or the directions I have given officers via a Chief's memorandum for handling enforcement of the Emergency Order," KFSN reported.

"This was an unfortunate incident and we are committed to making sure it won't happen again. I want everyone to know that I fully understand the financial hardship of every small business in Fresno and we are doing everything we can to help them, including a plan to safely restart our local economy. In the meantime, I cannot stress enough to the people of Fresno that following these temporary rules like social distancing and wearing masks are absolutely the best way to get back to normal. Let's all take a deep breath and then commit to work together to bring our local and state partners in line with our plans to get our people back to work."

Fresno City Council member Garry Bredefeld called Brand's shutdown rules — in place through May 31 — "authoritarian," the Bee said, adding that Bredfeld criticized Sunday's actions on Facebook: "The fight to end this tyranny is just starting, and we will win."

What does the owner of Waffle Shop have to say?

Waffle Shop owner Ammar Ibrahim told the Bee he received a $5,000 fine for opening Sunday and accused code enforcement officers of using heavy-handed tactics to served the citation. He added to the paper a confrontation could have been avoided if the officers had called his shop and asked him to come outside — and that police didn't have "jurisdiction" in the matter.

Lisa Kudrow says she avoids talking politics, believes 'Friends' had 'no business' telling stories about 'experiences of being a person of color'

CBS gets savaged for pushing study blaming climate change for childhood obesity: 'May be one of the dumbest things I've read in a while'

Want to feel stronger at 60 than at 30? Top expert says do this One thing

Glenn Beck: "We HAVE to teach real history to our kids before it's too late!

Man crashes car into barricade near Capitol, vehicle goes up in flames, fires gun, then shoots himself

Bodycam video: Man called 911 to complain about cold fries from McDonald's. Police find out he is a murder suspect on the run. He ends up eating pavement instead of fast food.