Fury Directed at EPA Over Massive Toxic Sludge Spill: ‘They Are Not Going to Get Away With This’

"You can’t even describe it."

Cement Creek, which is a tributary of the Animas River was flooded with millions of gallons of mining wastewater, is viewed on August 11, 2015 in Silverton, Colorado. (Photo by Theo Stroomer/Getty Images)
Jon Street

DENVER (TheBlaze/AP) -- The yellow plume of contaminated wastewater that spilled from an abandoned Colorado mine and flowed downstream toward two other states is three times larger than originally estimated, federal officials say.

The U.S. Environmental Protection Agency used better measurements to find that 3 million gallons of wastewater laced with heavy metals, including lead and arsenic, spilled from the Gold King Mine and turned the Animas River a mustard yellow last week. The agency initially estimated 1 million gallons escaped. 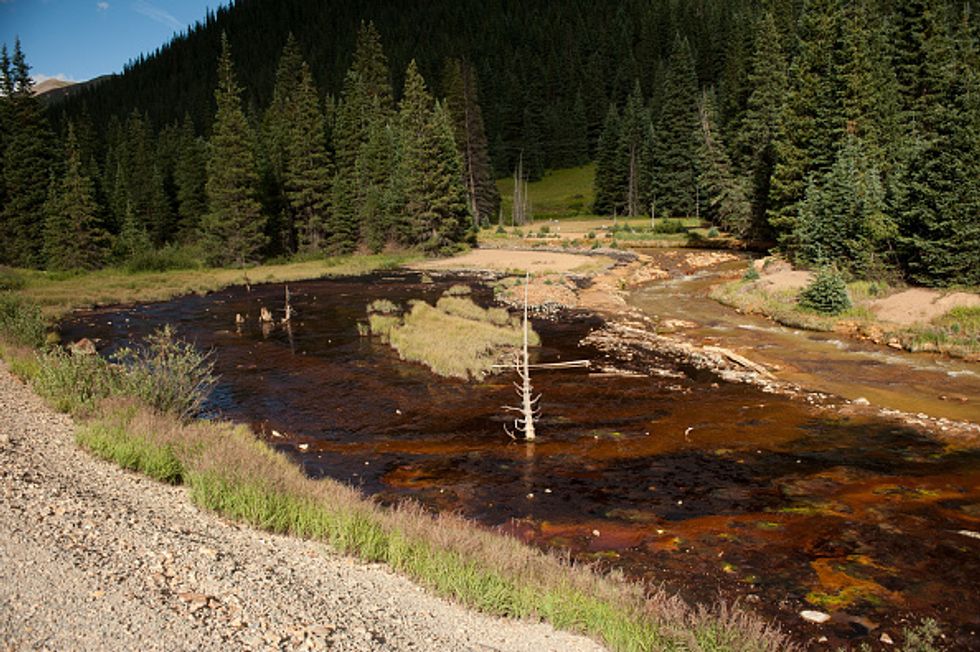 Cement Creek, which was flooded with millions of gallons of mining wastewater, is viewed on August 11, 2015 in Silverton, Colorado. (Photo by Theo Stroomer/Getty Images)

"They are not going to get away with this," Russell Begaye, president of the Navajo Nation, told Fox News.

Begaye said he plans to sue the EPA for the massive spill that has expanded into the San Juan and Colorado Rivers.

The EPA has so far been unable to determine whether humans or aquatic life face health risks from the pollution, but an agency official said Sunday that she doesn't believe wildlife is in great danger.

The sludge moved so quickly that it would not have "caused significant health effects" to animals that consumed the water, EPA toxicologist Deborah McKean said.

No drinking-water contamination has been reported because water utilities shut down their intake valves ahead of the plume to keep it out of their systems. Farmers also closed the gates on their irrigation ditches to protect their crops.

The discolored water stretched more than 100 miles from where it originated near Colorado's historic mining town of Silverton into the New Mexico municipalities of Farmington, Aztec and Kirtland.

There, the EPA and New Mexico are offering free testing of water from domestic wells this week.

The leading edge of the plume was headed toward Utah and Montezuma Creek near the town of Bluff, a tourist destination. The town, which is populated by a few hundred people, is surrounded by scenic sandstone bluffs.

To keep water flowing to homes, the residential tank in Halchita has been filled with clean water hauled 40 miles from Arizona.

In Colorado, the EPA planned to meet with residents of Durango, downstream from the mine as water tests from near the city were still being analyzed.

Federal officials have not said how long cleanup efforts will take after an EPA-supervised crew trying to enter the mine to pump out and treat the water caused the spill.

New Mexico Gov. Susana Martinez, who surveyed the damage over the weekend, was shocked by what she saw: "The magnitude of it, you can’t even describe it. It’s like when I flew over the fires, your mind sees something it’s not ready or adjusted to see."

For many in New Mexico, the wastewater spill is a stirring reminder of a uranium spill from 36 years ago, in which 1,100 tons of solid radioactive mill waste and 93 million gallons of acidic and radioactive tailings solution was accidentally dumped into a nearby waterway.