"We haven't ruled out terrorism."

BANGKOK (AP) -- This city rocked by a bombing that killed at least 20 people was rattled further Tuesday when another explosive device blew up at a ferry pier - this time harmlessly. As police investigated Monday's deadly attack, the prime minister said they were looking for "some suspects" spotted in security video.

Police Senior Sgt. Maj. Worapong Boonthawee said an explosive device was thrown from the Taksin Bridge and blew up at Sathorn Pier after falling into the Chao Phraya River below. "There is no injury," he said. Security camera footage shows a sudden blast of water over a walkway at the pier as bystanders run for safety. 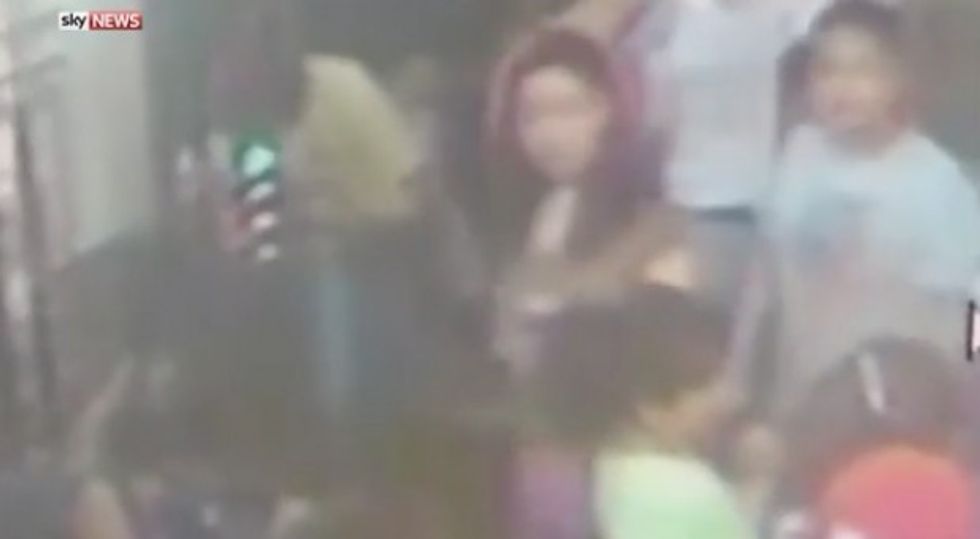 The man in the yellow T-shirt, considered a suspect in the bombing, was seen sitting on a bench and depositing a backpack. (Image source: Sky News) 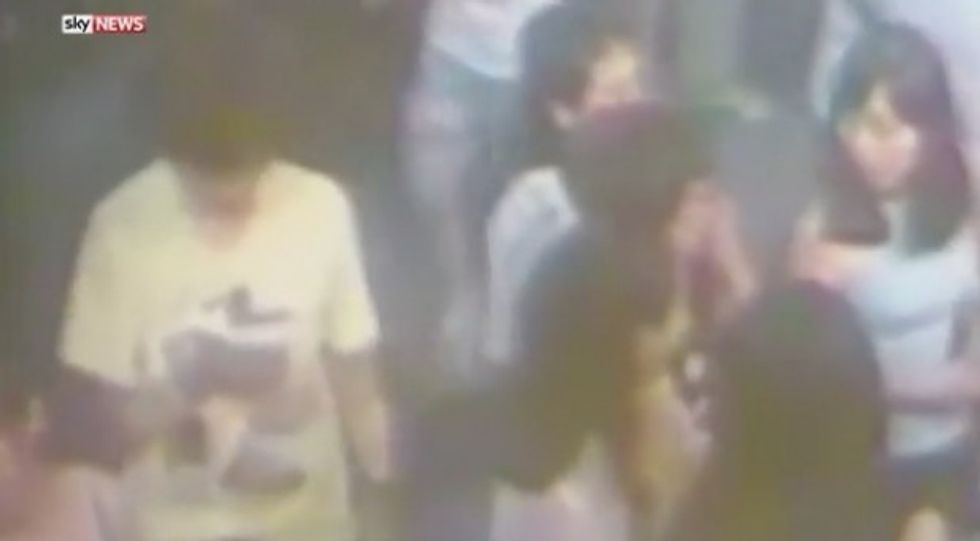 Footage then showed him walking away. (Image source: Sky News)

Prime Minister Prayuth Chan-ocha called Monday's explosion at a shrine at a busy central Bangkok intersection "the worst incident that has ever happened in Thailand," and he promised to track down those responsible.

"There have been minor bombs or just noise, but this time they aimed for innocent lives," Prayuth said. "They want to destroy our economy, our tourism."

Well over 100 people were injured by the improvised explosive device, which scattered body parts, spattered blood, blasted windows and burned motorbikes to the metal. The explosion went off around 7 p.m. in an upscale area filled with tourists, office workers and shoppers.

"Today we have seen the closed-circuit footage, we saw some suspects, but it wasn't clear," Prayuth said. "We have to find them first." 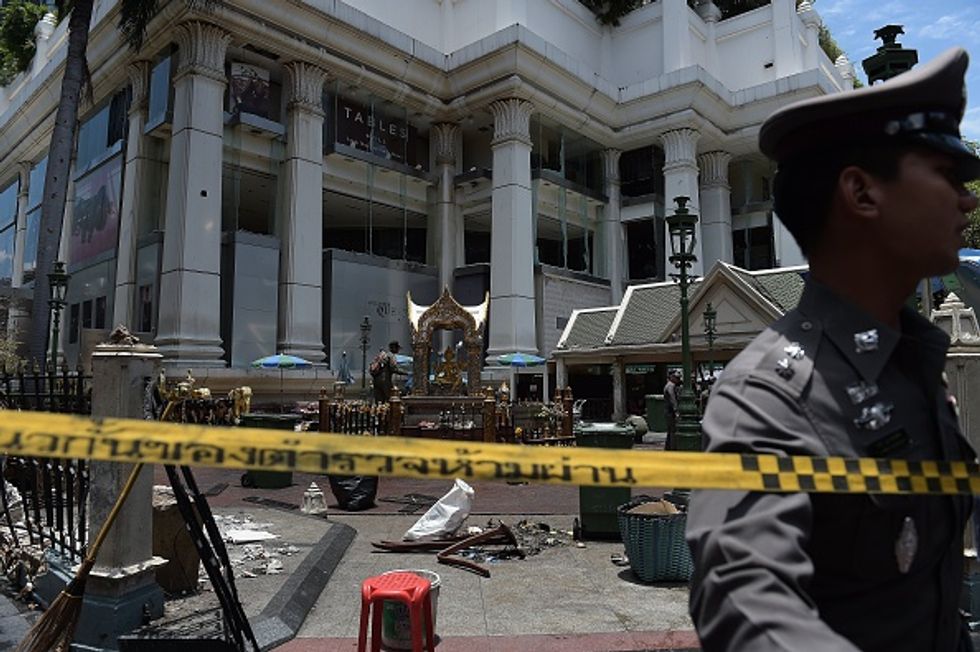 A policeman (C) inspects the cordoned-off site of a bomb blast at the popular Erawan shrine in the heart of Bangkok's tourist and commercial centre on August 18, 2015. The death toll from a bomb blast in the Thai capital rose to 20 on August 18 with 123 wounded, police said, with eight tourists from China, Hong Kong, Malaysia and Singapore among those killed in the attack. (CHRISTOPHE ARCHAMBAULT/AFP/Getty Images)

Later, Prayuth gave his first televised address since the bombing, saying the government will expedite "all investigative efforts to find the perpetrators and bring them to justice," but providing nothing specific about suspects or the status of the investigation.

Thai authorities identified five victims as Thai and four as Chinese - two of them from Hong Kong - along with two Malaysians and one Singaporean, and said the nationalities of the other eight victims remained unknown.

Defense Minister Prawit Wongsuwan said the attack, which no one immediately claimed responsibility for, was aimed at destroying the country's economy by targeting a major tourist area.

"It is much clearer who the bombers are, but I can't reveal more right now," Prawit said, as he headed into a Cabinet meeting Tuesday morning. "We haven't ruled out terrorism." 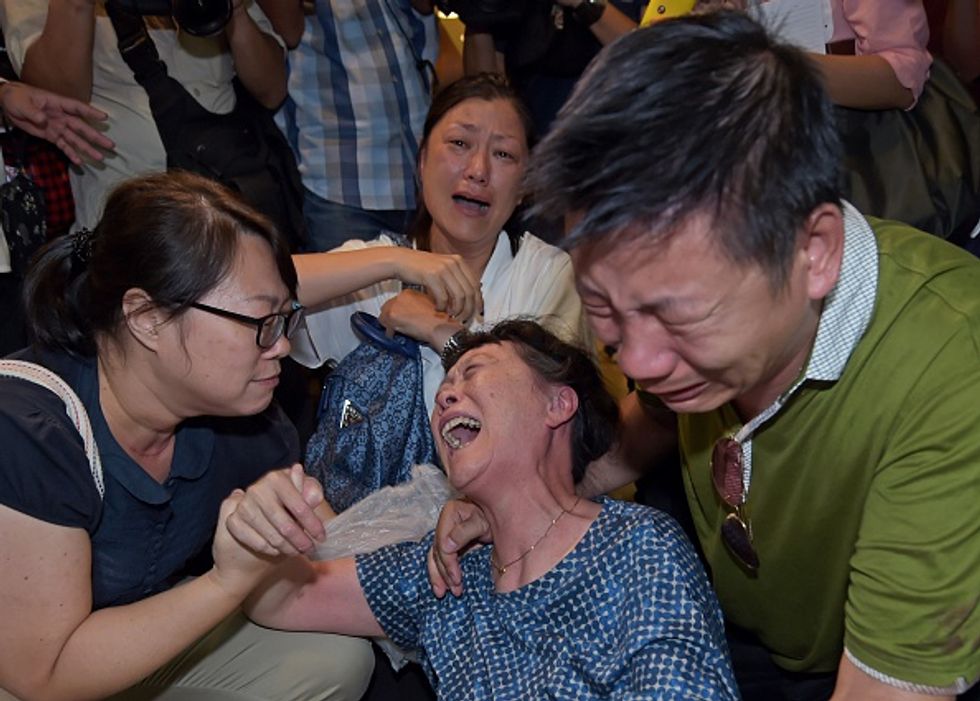 Relatives of a Chinese tourist killed in a bomb blast outside a religious shrine grieve after identifying the body at the Institute of Forensic Medicine in Bangkok on August 18, 2015. The death toll from a bomb blast in the Thai capital rose to 20 on August 18 with 123 wounded, police said, with eight tourists from China, Hong Kong, Indonesia, Malaysia and Singapore among those killed in the attack. (PORNCHAI KITTIWONGSAKUL/AFP/Getty Images)

He acknowledged that authorities had no idea an attack was planned.

"We didn't know about this ahead of time. We had no intelligence on this attack," the defense minister said.

Prayuth vowed to "hurry and find the bombers," though he noted there may be just one perpetrator. Speaking to reporters, he continued what has been a notoriously prickly relationship with the media since the former general took control of the government in a May 2014 coup.

Asked if there were leads on the suspects' identities, Prayuth bristled, "We are still investigating. The bomb has just exploded - why are you asking now? Do you understand the word investigation? It's not like they claim responsibility." 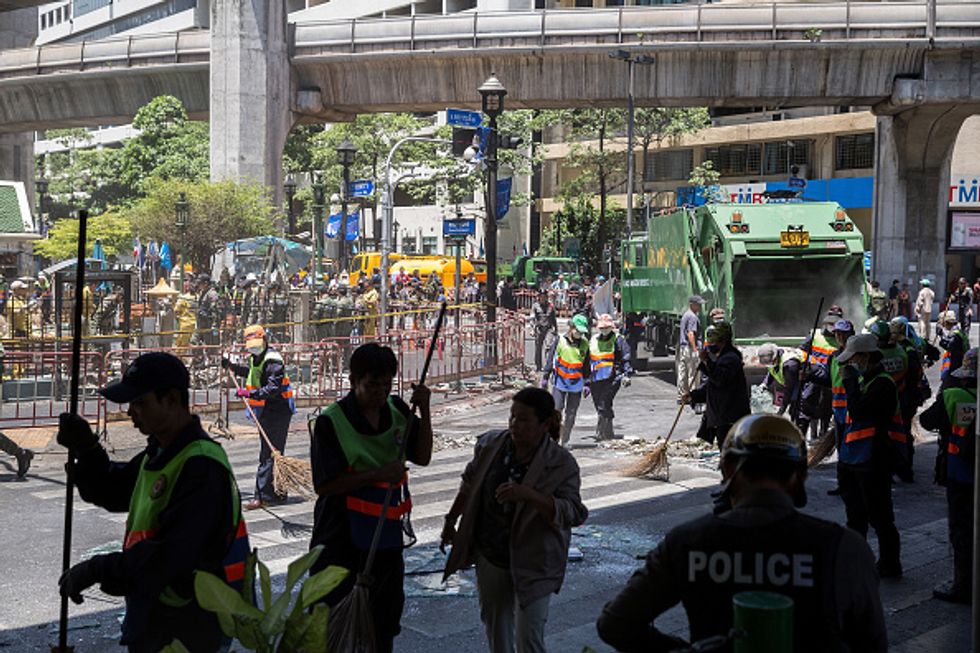 Workers clean up debris from the site of the explosion on August 18, 2015 in Bangkok, Thailand. Last night a bomb explosion in the centre of Bangkok, which went off next to the Erawan Shrine killed at least 21 people and hundreds more injured. It is believed the bomb was placed next to the shrine to deliberately harm tourists. So far the attack has not been claimed and it is unclear who is likely to have been responsible for the bomb. (Axelrod/Getty Images)

Thailand has seen many violent attacks in recent years, particularly through a more-than-decade-long insurgency by Muslim separatists that has left more than 5,000 dead in the country's deep south. Those attacks have never extended to the capital, however.

Bangkok has seen politically charged violence over the past decade; the deadliest, in 2010, killed more than 90 over two months and was centered on the same intersection where Monday's bomb went off. But none of those attacks included a bomb blast that seemed intended to produce mass casualties.

Matthew Wheeler, Southeast Asia security analyst for the International Crisis Group, said the bombing was a "new type of attack for Bangkok" that doesn't bear the trademarks of typical violence over the past decade from political instability or Muslim separatists.

"It is certainly not like politically motivated attacks we've seen in the past which have generally been designed to grab attention but not cause casualties," Wheeler said, adding that he expected it would have "major ramifications for security in Thailand." 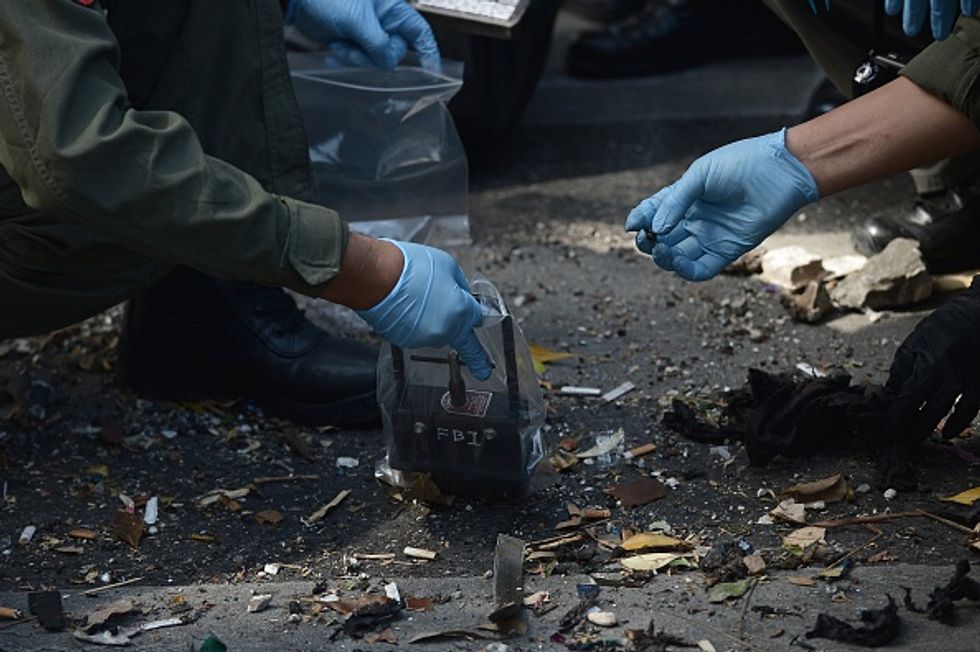 Policemen inspect the cordoned-off site of a bomb blast at the popular Erawan shrine (background) in the heart of Bangkok's tourist and commercial centre on August 18, 2015. The death toll from a bomb blast in the Thai capital rose to 21 on August 18 with 123 wounded, police said, with seven tourists from China, Hong Kong, Malaysia and Singapore among those killed in the attack. (CHRISTOPHE ARCHAMBAULT/AFP/Getty Images)

Early Tuesday morning, investigators surveyed the damage as police and soldiers guarded the area, still littered with shattered glass and other debris. The normally busy intersection that was closed off to traffic and eerily empty aside from onlookers standing behind police tape to take pictures. Barricades were set up outside five-star hotels in the neighborhood and security stopped cars to inspect trunks before letting them pass. The intersection was reopened by midday.

At least 20 people were confirmed dead and 140 injured, according to the Narinthorn emergency medical rescue center.

National chief of police Somyot Poompanmoung said the bomb was made with a pipe wrapped in cloth and weighed 3 kilograms (more than 6 pounds).

It detonated at the Erawan Shrine, which is dedicated to the Hindu god Brahma, but is extremely popular among Thailand's Buddhists as well as Chinese tourists. Although Thailand is predominantly Buddhist, it has enormous Hindu influence on its religious practices and language.

Throngs of tourists come there to pray at all hours, lighting incense and offering flowers purchased from rows of stalls set up on the sidewalk along the shrine. The site is a hubbub of activity, with quiet worshippers sometimes flanked by Thai dancers hired by those seeking good fortune, while groups of tourists shuffle in and out.

Bangkok has been relatively peaceful since a military coup ousted a civilian government in May last year after several months of sometimes violent political protests against the previous government.

At the same time, the military government has tightly controlled dissent, arresting hundreds of its opponents and banning protests. Tensions have risen in recent months, with the junta making clear that it may not hold elections until 2017 and wants a constitution that will allow some type of emergency rule to take the place of an elected government.

Last week, Thaksin posted a message on YouTube urging his followers to reject the draft constitution because he said it was undemocratic. The draft charter is supposed to be voted on next month by a special National Reform Council. If it passes, it is supposed to go to a public referendum around January.

Another source of recent tension is the annual military promotion list, with the junta's top two leaders - Prime Minister Prayuth and Deputy Prime Minister Prawit - widely believed to be supporting different candidates. The reshuffle, which comes into effect in September, has traditionally been a source of unrest, as different cliques in the army, usually defined by their graduating class in the military academy, seek the most important posts to consolidate their power.

The U.S. Embassy in Bangkok issued an emergency message for U.S. citizens, advising them to avoid the shrine's area. In Washington, State Department spokesman John Kirby expressed deep sympathy to those affected by the Bangkok explosion. He said authorities were still determining whether any Americans were among the victims.

"We didn't think anything like this could happen in Bangkok," said Holger Siegle, a German who said he and his newlywed wife had chosen Thailand because it seemed safe. "Our honeymoon and our vacation will go on, but with a very unsafe feeling."