"Loretta Lynch ... owes her political patronage to a president that has tacitly endorsed Hillary Clinton for president.”

Hillary Clinton, former Secretary of State and 2016 Democratic presidential candidate, speaks during a campaign event in Detroit, Michigan, U.S., on Monday, March 7, 2016. Clinton and Senator Bernie Sanders, an independent from Vermont and 2016 Democratic presidential candidate, made last bids for support in Michigan's Democratic primary Tuesday, with both arguing they would be able to navigate the gridlock in Washington that's spawned anger among voters of both political parties. (Sean Proctor/Bloomberg via Getty Images)
Fred Lucas

A former U.S. attorney is calling for a special prosecutor to investigate Hillary Clinton’s emails, as the Democratic presidential frontrunner insisted Monday that neither she nor her top staff were targets of the FBI probe of her private email server.

“I am certain there are many of my former colleagues that share my concern about partisan nature of the attorney general,” Whitaker, executive director of the Foundation for Accountability and Civic Trust, told TheBlaze. “Loretta Lynch, while a good prosecutor and former U.S. attorney herself, has only donated to Democrats. She owes her political patronage to a president that has tacitly endorsed Hillary Clinton for president.” 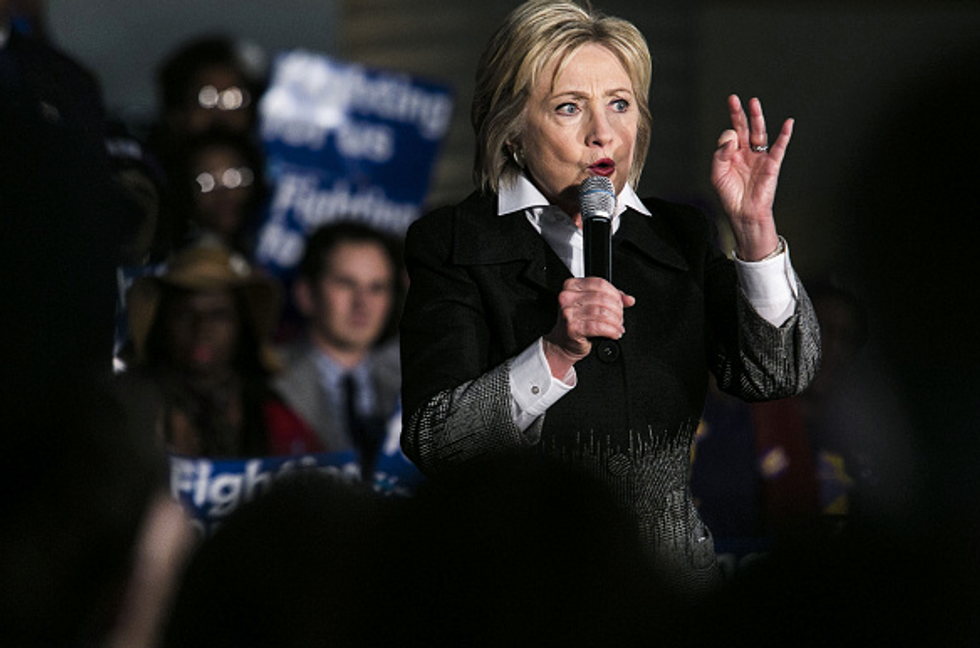 “I really think the American people would be better satisfied if we had an independent special prosecutor that could move this ball forward that could make the decision to prosecute, whether its Hillary Clinton or whether it’s her colleagues like Huma Abedin or Cheryl Mills or Jake Sullivan,” Whitaker continued.

During the Fox News presidential forum Monday, Clinton again asserted that “nothing I sent was marked classified,” adding, “Every government official, and this is a legal theory — not just a theory, it’s a legal rule — gets to choose what is personal and what is it official.”

“Once the American people see it, they will know how absurd this is,” she continued.

However, her insistence of innocence comes after a tumultuous week in which Bryan Pagliano, who set up Clinton’s private email server, was granted immunity after the FBI secured his cooperation in its investigation into whether Clinton mishandled classified information as secretary of state.

Further, the Washington Post reported that Clinton wrote 104 email messages that the government says are classified.

Whitaker believes the immunity deal is a very serious matter.

“You have the concentric circles of an investigation where you work from the outside in,” Whitaker said. “This tells me they’ve collected all of the physical and other evidence that they could without talking to folks and now they are working to the middle and this gentleman who set up the private email server, I think, is going to have a lot of key evidence that they couldn’t otherwise obtain.”

Immunity deals come when someone has exposure to criminal charges.

“So what this tells me is the gentleman who set up the private email server thinks he has some exposure,” Whitaker said. “To get an immunity deal and ask for one and receive it, that’s a big development in the investigation. It suggests they are going aggressively to maybe find some criminal charges to apply to other folks in this.”

Nonetheless, even once this evidence is gathered, it’s still the Justice Department that makes the ultimate decision, Whitaker said.

“I know Jim Comey. He was the deputy attorney general when I was the U.S. attorney,” Whitaker said. “I think Jim Comey is the right person to lead this investigation at the FBI. But ultimately, the decision to charge or not charge solely resides in the attorney general. That’s where my biggest concern is.”

“The FBI’s recommendation is going to be in private. It’s not going to be something they publicly announce, but I think it will be leaked ultimately, depending on the outcome of the case,” Whitaker said. “Whether or not the recommendation of the FBI is to prosecute, it’s still the discretion to seek those charges and pursue the case reside in the attorney general. [Lynch] has been very outspoken that while she won’t necessarily say she is the one who decides, ultimately, she is the decider.”