College football coach suspended after telling school paper he'd have dinner with Adolf Hitler: 'The way he was able to lead was second-to-none'

An athletic official reportedly asked newspaper staffers to remove the comment from the web, which they did — with regret

Morris Berger — who was named GVSU's offensive coordinator only a week ago after coaching tight ends at Texas State University — made the comments in a Grand Valley Lanthorn interview published Thursday, the station said.

Here's the relevant portion of the interview that sports editor Kellen Voss conducted:

KV: So you graduated from Drury with a degree in History, you're a history guy. If you could have dinner with three historical figures, living or dead, who would they be? And I'm ruling out football figures.

MB: This is probably not going to get a good review, but I'm going to say Adolf Hitler. It was obviously very sad and he had bad motives, but the way he was able to lead was second-to-none. How he rallied a group and a following, I want to know how he did that. Bad intentions of course, but you can't deny he wasn't a great leader.

KV: The way he was able to get people to rally around him was crazy.

MB: Yeah, that's definitely one. You have to go JFK, his experience with the country and being that he was a good president and everything. And this might sound crazy, but Christopher Columbus, the ability to go on the journey he was on and his emotion into the unknown. Think about putting yourself in the setting of that unknown, and then to take it all in as you arrive is crazy.

WOOD's video broadcast noted that an athletic official asked the student journalists to remove Berger's comment from the web, which they did — and soon regretted.

"That student aspect kicks on first, and you listen to that because there may be an administrator or person of power," the paper's editor-in-chief Nick Moran told the station. 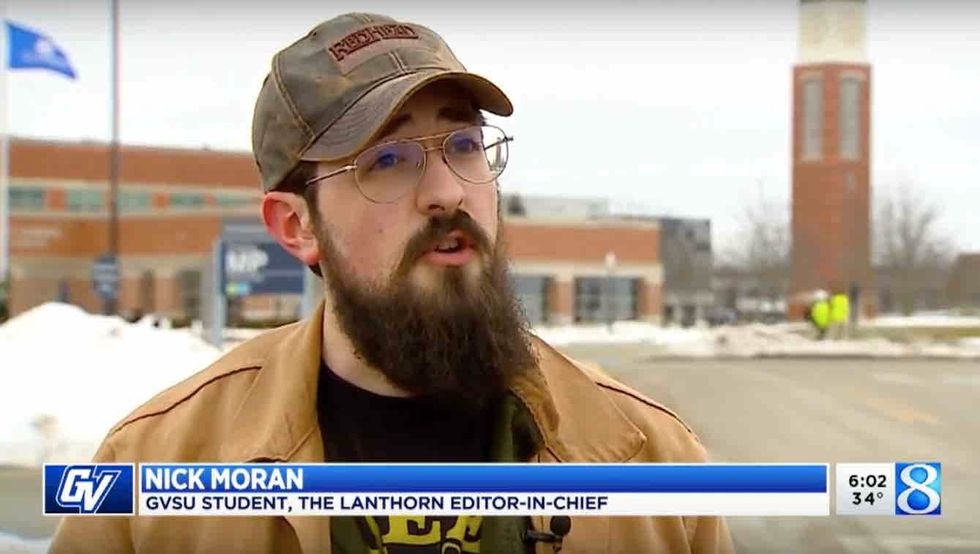 But Moran said in a Sunday editor's note atop the interview that following "its initial publication, the final two responses were mistakenly removed from this story. It has since been reverted back to its original version, and is a direct transcription of the full, recorded interview."

What did the school have to say?

"The comments made by Offensive Coordinator Morris Berger, as reported in The Lanthorn student newspaper, do not reflect the values of Grand Valley State University," a statement from the school indicated, WOOD reported. "Berger has been suspended and the university is conducting a thorough investigation."

Berger didn't respond to requests for comment, the station added.

What did students have to say?

"You can't get more offensive than that," Marlee Sullivan, a GVSU senior, told WOOD. "Fire him."

"I don't see why we need that on our campus," Austin Balkema, another GVSU senior, noted to the station. "We need to include everybody, and I don't think bringing up that part of history is a very good idea."

Senior Matthew Collins is part of a Jewish fraternity and told WOOD that Berger's words are irresponsible.

"There is an expectation for an offensive coordinator of such a high university to be able to understand a question and answer it in a way that doesn't cause ripples like it has," Collins offered to the station.

But Ana Harris — who is Jewish — told WOOD the school overreacted by suspending Berger.

"People tend to be a little bit quick to feeling offended," she told the station, adding that the coach should be given a "chance to explain himself, which I think he did in the comments, and I think his comment is justifiable."