'It has a calming effect'

The Christian worship song, "Sing Hallelujah to the Lord," has become what Reuters called the "unlikely anthem" of Hong Kong's massive protests against an extradition bill.

"Protests around the world often develop their own soundtrack, usually songs with lyrics of defiance and solidarity, aiming to keep crowds energized and focused," the outlet said. "But the hymn taken up in Hong Kong hardly ticks those boxes."


A group of Christian students sang several songs in front of the city's Legislative Council — the main protest site — and "Sing Hallelujah to the Lord" caught on with the crowd, despite only about 10 percent of those in Hong Kong professing Christianity, Reuters said.

"This was the one people picked up, as it is easy for people to follow, with a simple message and easy melody," Edwin Chow, 19, acting president of the Hong Kong Federation of Catholic Students, told the outlet.

And over nearly two weeks, the song has been heard nearly nonstop at the main protest site, at marches, and even during stand-offs with police, Reuters said. 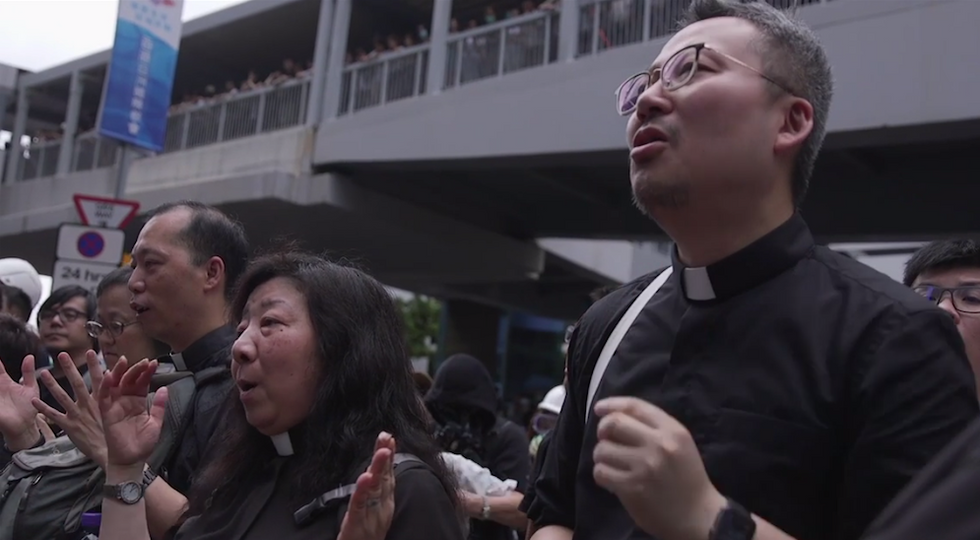 "Stop shooting, or else we sing 'Hallelujah to the Lord,'" one protest sign read amid the firing of rubber bullets, the outlet noted.

The Christian students also figured singing worship songs like "Sing Hallelujah to the Lord" could help protect protesters since religious gatherings can be held without a permit, Reuters said.

"It also shows that it is a peaceful protest," Chow added to the outlet.

'It has a calming effect'

"Sing Hallelujah to the Lord" was composed for Easter in 1974 by Linda Stassen-Benjamin in the United States, Reuters said, noting that the title is repeated during the song in a minor key, "which gives it an air of meditative solemnity."

"It has a calming effect," Timothy Lam, 58, a pastor at Grace Church Hong Kong, told Reuters, adding that during at least one protest "police had a lot of equipment, they were very tense and searching people. The students sang this to show they were peaceful."

More from the outlet:

Hong Kong's Beijing-backed government leader, Carrie Lam, has postponed the introduction of the extradition bill and apologized in the face of the huge show of opposition.

Critics say the law would undermine Hong Kong's independent judiciary and rule of law, guaranteed by a "one country, two systems" formula under which the former British colony returned to Chinese rule in 1997.

Given Carrie Lam is Catholic, some protesters told Reuters "Sing Hallelujah to the Lord" might have helped sway her.

"It's one of the main reasons we sing it," Jamie, an 18-year-old student who is not Catholic, told the outlet.