In the wake of Texas State University police arresting four students last week — sparked by one of them allegedly stealing a "Make America Great Again" hat off another student's head followed by confrontations with cops that went too far — left-wing students staged a sit-in Thursday and issued a list of demands, including sensitivity training for police, the University Star said.

"Part of it is just us feeling like the need to react immediately," student activist TeraLynn Steele told the paper regarding the sit-in. "I think we were all just pissed and angry and in more of an exhaustion sort of manner. ... This was fear, this was pain, this was hurt. ... we were all really angry, but it was more from a place of annoyance more than anything else."

Between 50 and 60 students occupied a student center room beginning about 6 p.m. and stayed overnight, the University Star said. Among their demands were mandatory sensitivity training for university police officers, the paper said in a separate story, adding that officers should be trained in de-escalation tactics and how to recognize and overcome biases against minority students. They also want an academic cultural diversity requirement for students, the paper added.

A Texas State University student shot video last week of what he told Campus Reform occurred after another student stole his MAGA hat amid a heated political discussion on campus.

The clip shows one student in a light purple shirt dropping and kicking the student's MAGA hat as campus police confront her. 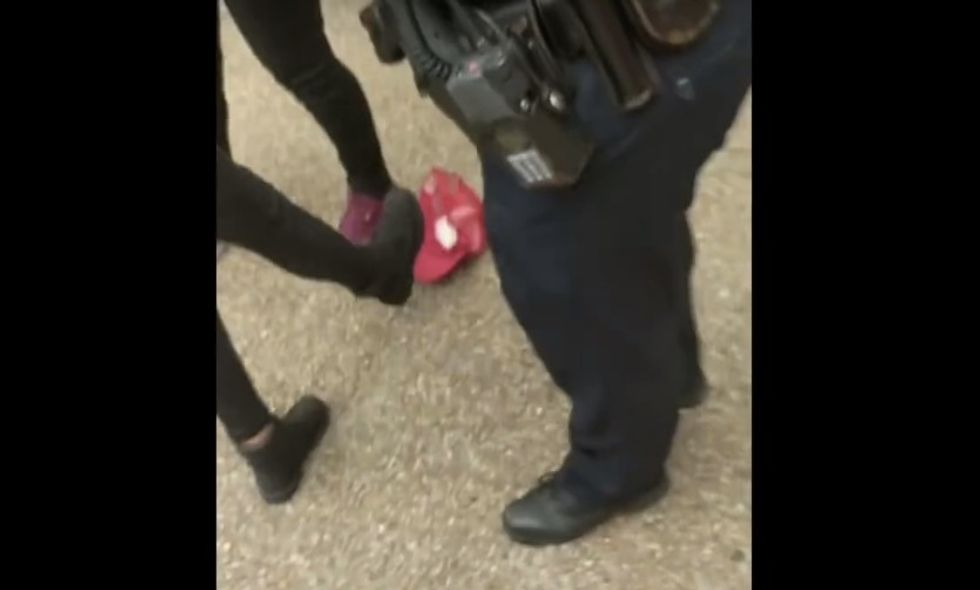 While she's handcuffed, cops drop another student face down on the quad pavement as other students holler in protest and gather around the growing number of police. 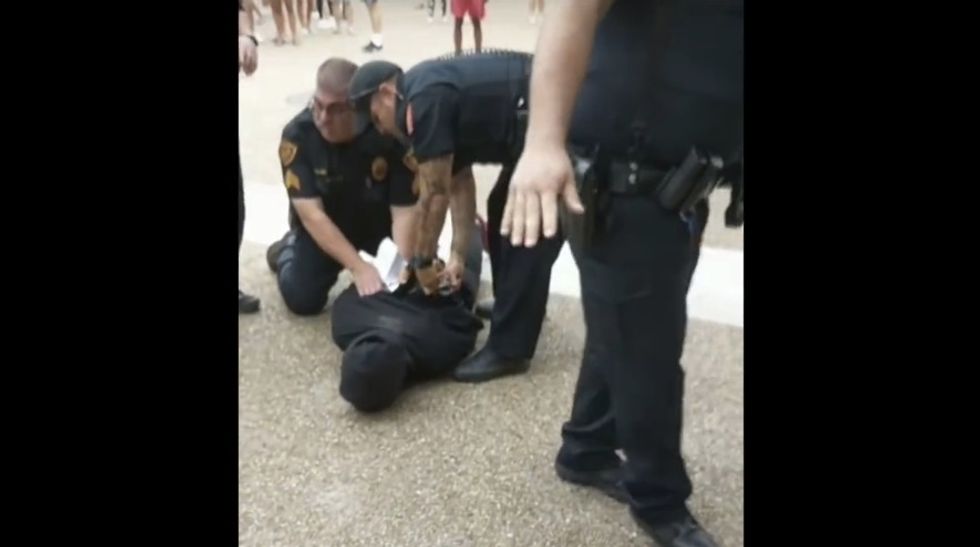 A third student begins screaming and crying hysterically, trying to get past officers: "Don't f***ing touch her!"

As the pair of handcuffed students are led away, someone is heard off camera stating, "If that's not white privilege, I don't know what the f*** is." 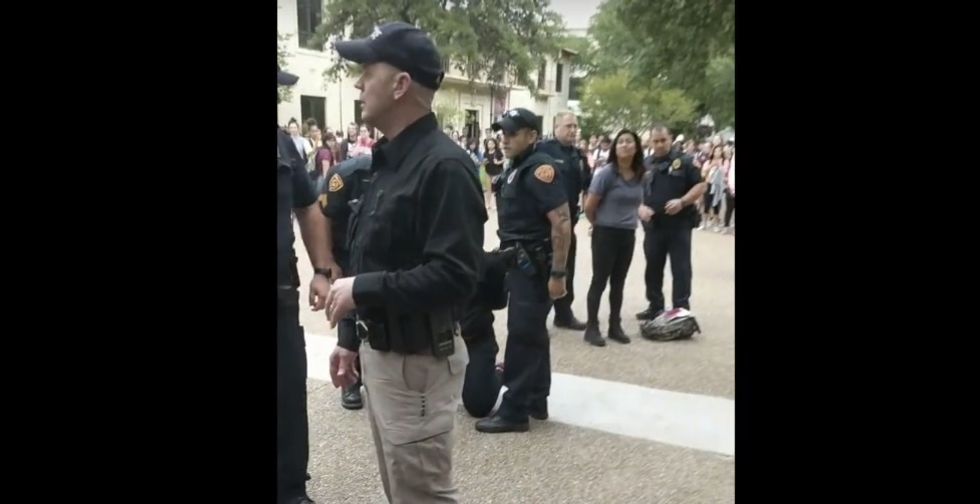 As police led the arrested individuals through a building, the student who earlier was screaming and crying hysterically upped things quite a bit, getting in the MAGA-hat student's face and bellowing, "Get out! Why are you here?! Why are you here?! Leave!"

Then inside the campus police station, yet another leftist student wearing a bandanna over her face tried to get past police to one of the arrested students and actually appeared to bump chests with a cop. 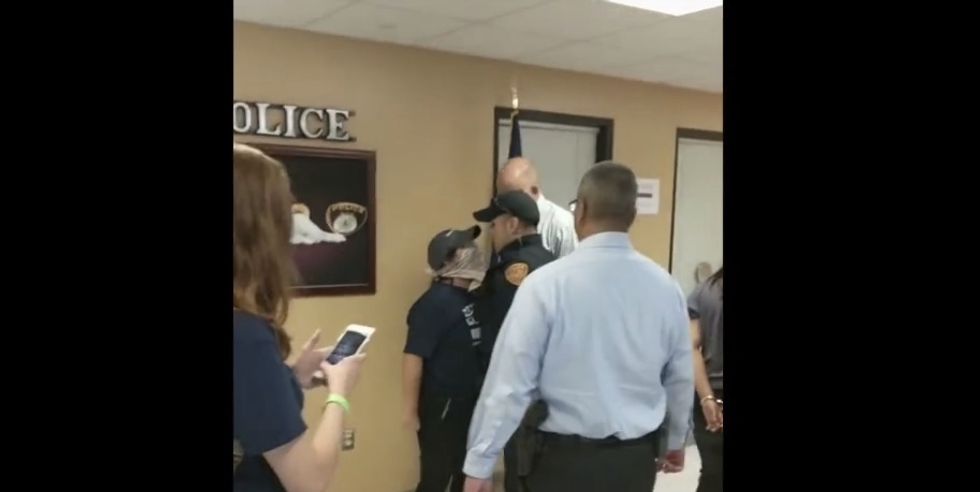 She was immediately turned against a wall and handcuffed as she yelled, "Don't f***ing touch me! What crime are you suspecting me of committing?! Articulate it! Articulate it!" 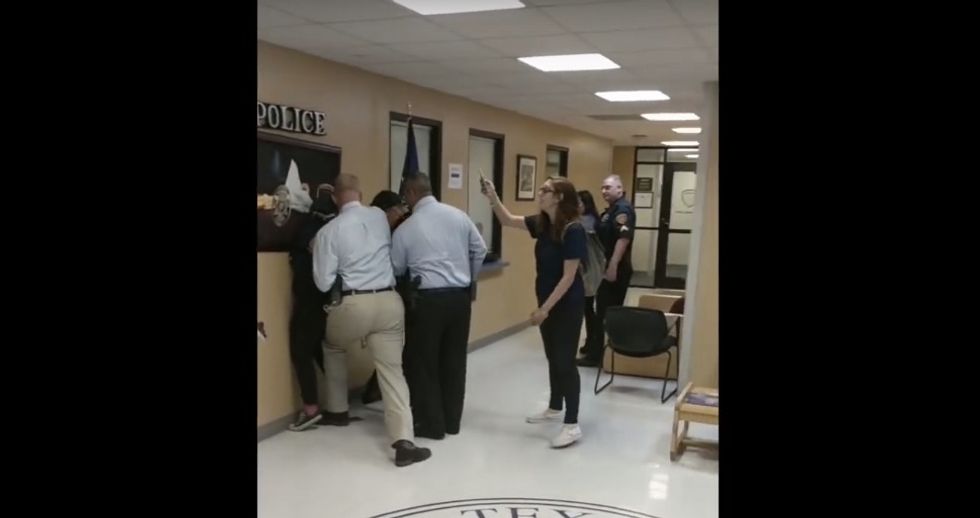 The MAGA hat that sparked the Texas State arrests is the iconic symbol of President Donald Trump's 2016 campaign — and it's more or less become kryptonite to leftists. TheBlaze has previously reported about numerous instances in which anti-Trump folks have flipped out at MAGA-hat wearers, taken off or knocked caps off their heads, or actually stole them as video recorded the incidents.